TORONTO – Efforts to expand the vaccine rollout in Ontario to adults of all ages in some long-standing hot spots drew massive queues at an pop-up clinic on Saturday as those who were otherwise excluded from the vaccination campaign from the province rushed to get vaccinated.

Hundreds of people lined up for hours in Toronto’s Thorncliffe Park neighborhood, some with lawn chairs, anxious to receive their first dose of vaccines that are still generally reserved for Ontarians of certain ages or professions.

Ema Golich waited about four hours before getting the shot, but that didn’t dampen her anticipation for a time she had been thinking about for months.

“I feel great, I feel excited,” the 22-year-old said as she approached the front row.

“We have been in the pandemic for a year and it finally feels like it’s about to disappear. It is a step towards the return to normal life.

Fozia Chaudhary brought her daughter, who is still too young to be vaccinated, to the clinic because her husband had to work. She said timing was essential for her neighborhood, which has been considered a COVID-19 hotspot by health officials.

“It’s a crowded area and I’ve heard that there are so many people getting the virus,” she said.

“So I decided if we had this opportunity to get vaccinated, why not?” Why not get it today? “

The Thorncliffe Park clinic is one example of an approach the province hopes to implement in several other hard-hit neighborhoods.

Ontario announced the plan this week, saying it would send mobile teams to postal codes where the virus is prevalent, offering vaccines to residents aged 18 and over in gathering places, residential buildings, faith centers and large workplaces. Areas will be selected based on patterns of transmission, illness and death from COVID-19.

Officials said the plan will take some time to fully kick in, but experts say the approach is a good one that will help mitigate the impact of the third wave that is sending young people to hospital, many of whom are workers in essential jobs such as manufacturing.

“I think this intervention is one of the best things we can do right now to change the course,” said Dr. Sumon Chakrabarti, infectious disease physician at Trillium Health Partners in Mississauga, Ont.

“It won’t get us out of the third wave, but it will be something that hopefully can alleviate some of the severity of this one. At the same time, once we start to come out of it, it will be solid protection in the months to come. “

Chakrabarti said lowering the eligible age range to 18 in hot spots is “vital” to breaking chains of transmission in neighborhoods where workers often bring the virus home to their families, a trend which he says is particularly pronounced during the third wave.

It’s likely that some people living outside of selected zip codes will try to “play with the system” to receive a shot, Chakrabarti said, but there are mechanisms like asking for proof of address that would minimize some of that activity. Participants at the Thorncliffe Park clinic were asked to show their provincial health card as proof of their postal code.

Even though some high-income people do become eligible by living within the zip code, the approach remains a good way to reach those most at risk, Chakrabarti said.

“Don’t let perfection get in the way of the good,” he said.

He also noted that this is the right decision to take now, following the province’s initial approach that prioritized long-term care residents, healthcare workers and the oldest elderly. – which he said has protected vulnerable people and kept health workers at work. .

“I think it was the right first step to take regardless of what is happening now,” he said. 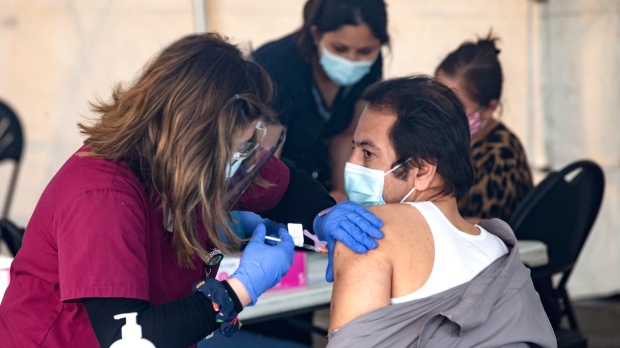 “We know that the communities where essential workers live, and especially where low-income racialized people live, these are the hardest hit areas and those areas need to be prioritized for immunization,” he said.

“A postal code system is not perfect, in the sense that there is gentrification in almost every region that exists, but it is a framework for us to make sure we are targeting those who are hardest hit. by COVID-19. “

This is not the only thing that should be done to protect workers, Dosani noted, highlighting other measures like paid sick leave, paid time off to get vaccinated and formal plans to bring vaccines directly to the community. workplaces would help people at risk of infection more at work.

He also said a mobile approach would benefit homebound people who cannot make it to clinics, and involving family physicians more in the vaccine rollout plan would help improve access within hard-hit communities. affected.

“Every step we can take to address the health disparities in implementing COVID-19 vaccine access will help a lot,” Dosani said.

A spokesperson for the Islamic Society of Toronto, which helped organize the vaccination clinic in Thorncliffe Park, said on Friday that a similar pop-up site had seen people queuing for hours before the first 200 doses were delivered. be administered at the Masjid Darussalam Thorncliffe Mosque.

“We have tents outside and with the infection rate so high here, a lot of people really want the vaccine,” Ilyas Mulla said.

“It’s good to have easy access and help the local community. “

This report by The Canadian Press was first published on April 10, 2021.

– with files from Liam Casey

With 50 U.S. states, plus territories, and thousands of cities and towns, it’s no surprise …